We hope you are all having a festive season and we’re truly looking forward to our 2020 events discussing Jane Austen’s work. This newsletter is a little greeting card to you all full of holiday tid-bits and news for 2020. We hope we can make it an annual tradition. A big thank you to all of our members and participants who keep our region going strong with book discussions, and also to Bianca Hernandez, Brooke Aiello, and Claire Bellanti for sharing their Regency expertise and good humor with us in 2019.

May 2020 be full of adventure and good company for you. Season’s greetings to you all!

In this newsletter:
Jane Austen, the Regency Era, and Christmas
Reading and Listening Recommendations
Season’s Traditions
Sugar and Spice: Recipes for the Season

Save the Date! Upcoming Austen-esque Events in our area:

Some say our common notions of how to celebrate Christmas were invented by Charles Dickens.  Well, while he may have had a hand in popularizing various evolving Yuletide celebrations, the fashions of celebrating Christmas have waxed and waned over the generations. 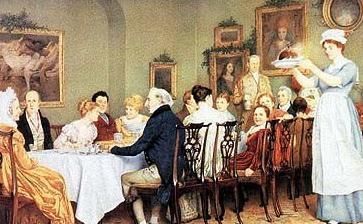 During the late 18th and early 19th centuries in England, Christmas was celebrated less elaborately than today.  In her letters, Austen only mentions Christmas events in passing to sister Cassandra.  She mentions being invited for Christmas dinners (which she declined one year), and talks another year about how she hopes for warm weather.

For most people of Austen’s time (much like today), Christmas was an opportunity to enjoy the company of family and friends, to entertain in one’s community, and share the bounty of life at a time when life slows down a bit.  It was also a time of charitable giving to the poor.

In her novels, Christmas is mentioned as a way of marking the passing of time and for bringing a variety of people into the same room for a little bit of exposition or deepening of the drama.

While it seems like a lot of visiting and dancing, there are a few clues to other Regency era Christmas celebrations. The Musgrove children making a mess with their arts and crafts is one. Brothers coming and going for visits while on holiday from school is another. Family making extended visits to other family, often from a city to more countrified surrounds. Attending services on Christmas Day is mentioned.

During the Georgian and Regency eras, the country folk had the more elaborate celebrations for Christmas. They had the space and the natural resources to keep some of the older Yuletide customs alive – like decorating with greenery on Christmas eve, celebrating a Wassail tree outdoors, killing and roasting a full goose, cutting and burning a Yule log. Not to mention, in the case of the affluent, more space for large sums of visitors.  Folks in London or Bath often didn’t have these resources at hand and so had a generally less festive time of it, although they still gathered for revels with family and friends. 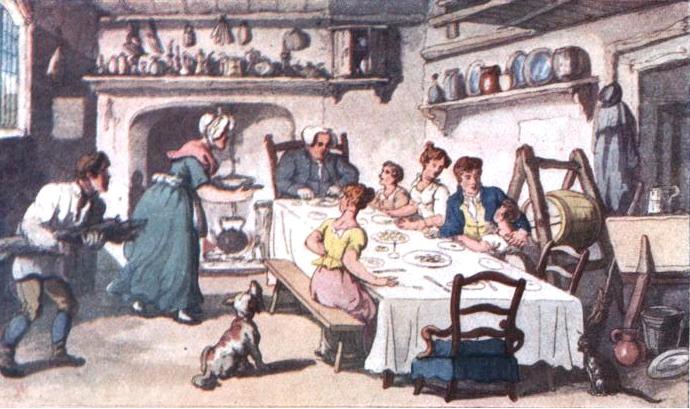 But nearly everyone with a steady income could pile into a friend or family member’s home for a Christmas pudding (a special treat on such occasions), to play games in the parlor, sing songs, and cut decorations with children from scraps of paper and rags.

Gift-exchanges usually happened between unequal parties, however.  Families might give gifts to the children – small coins or candies or a small toy. But other gifts were given to servants on Boxing Day or gratuities to regular tradesmen.

This season was also perhaps not as intense as our modern “holiday season” simply because it was stretched out over two to three weeks from just before Christmas until Epiphany (also called Twelfth Night or Orthodox Christmas).  This wrapped New Year’s Day into its celebrations and multiple gatherings could happen over the course of the season.  Folks felt less pressure to have everything together on one day!

Overall, though, while the Santas, and gift giving, and house decor, and parties may not have been as elaborate as they can seem today, the germ of the season was certainly palpable. The end of the year was a time to reflect, reconnect, share your bounty, make amends, and get a clean slate. Whether considered a highly religious holiday or not, the Christmas and Yuletide seasons have always been about preparing for what’s to come next and welcoming the light back into the world.

We wish you all the very best as you journey into 2020!

Reading and Listening Recommendations from the Central California Committee:

I sang this piece when I was in a small acapella group in college, and our 16 member group loved the piece so much, we sang it year round, as very few people knew it was actually a Christmas song. Whitacre is a current renowned American composer, conductor, and speaker who is know for his almost neo-impressionistic choral music. I love this piece in particular because it places with beauty of dissonance while remaining tonal in nature. There is a certain weightlessness to this piece, which conveys the poem’s imagery of light and warmth.    – Erin Connor, member at large.

My seasonal reading recommendation is One Day in December by Josie Silver. Not Austen-related, but it’s an easy enough read to pick up and put down as needed around the busy holidays. Sometimes you just need an escape that doesn’t require total concentration, and this book really fits the bill.

One Day in December by Josie Silver at Amazon.

Dickens’ Christmas Spirits was given to me last year as a present from a dear friend. Both last year and this, I’ve enjoyed picking it up and reading it a half-hour at a time throughout the season. It contains A Christmas Carol of course, but also several shorter seasonal stories in Dickens’ inimitable style.

If you’d rather listen to Dickens rather than read him, there are several good narrators of his work at Audible.com. Tim Curry has an acclaimed reading of A Christmas Carol and Richard Armitage reads a lesser known story called The Chimes. Both are soothing and engaging at the same time. Great for listening while wrapping gifts or baking.

Like many families, our committee members have traditions and recipes that mean a lot to them at this time of year. Often our seasonal rituals connect us to our communities and to the culture at large. Here are a few of ours:

Here is a fun read about the practice…

And one of our houses from last year:

One of my favorite holiday traditions as a child was going with my family to a Christmas tree farm, and cutting our own tree.After bringing the tree home, we would watch Christmas movies while decorating the tree with various ornaments, including some that were crumbling as they were homemade. This is one of my fondest childhood memories.

Sugar and Spice: Recipes for the Season

Getting the tastes of the season doesn’t have to be a chore. In fact, a few simple recipes can help brighten the mood and make you feel extravagant in even the simplest circumstances. From our recipe books:

In my mind, nothing represents the holidays like cranberries. I want to include them in all recipes…cakes, breads, and even paired with cheese. A staple holiday recipe is my homemade cranberry sauce, it is easy, delicious, and the inclusion of cloves makes the whole house smell of Christmas.

I hope you might consider skipping the canned type and adding this to your Christmas dinner.

Wash cranberries and set aside.

I served this mulled wine at last year’s JASNA holiday party and it was a hit.

Mulled wine is one of those simple, old-fashioned treats that is easy to put together for a holiday evening, makes the house smell good and makes you feel warm and pleasant all at once. Simple to adjust to suit your own tastes, below is the basic outline for a simple option for one bottle in a small saucepan.

Mix all of the above together in saucepan, stir occasionally, and heat over medium heat until barely simmering. Lower to low heat and continue to simmer for 20-30 minutes. Drink carefully as it may be quite hot! As the mixture boils down while you’re imbibing, it will concentrate somewhat at which point you can feel free to put in more wine and more brandy as needed. Also add more fruit and sweetening as needed if drinking all day.

Alcohol: To keep from burning off the alcohol potency, keep just below a boiling point and then lower the temp.

Cutting the alcohol: Some folks use apple cider to cut the potency of mulled wine. If you wish to do so, start with one cup of cider for one bottle of wine and work from there until you’ve got your proportions how you want them. This will make your brew sweeter, however, so hold off on adding any sugar/honey until you’ve tasted it with the cider.

Other secondary alcohol options for your brew: Some folks use vermouth instead of brandy as it is often sweeter. Bourbon is also popular while cointreau, Grand Marnier or curaçao are also fun options for bringing out the citrus in the brew. Frankly, you can use any liqueur you like or you can leave it out altogether.

Fruits: Citrus is the most common fruit option for mulled wine and orange is the most accessible. Like sangria, the more fruit you use, the more the juices infiltrate the brew and bring something special to it. Use fall/winter fruits like oranges, clementines, limes, lemons, apples, or pears. And use lots of them for an all-day brew!

Mulling Spices: The basics of mulling spices are chipped versions of spices you commonly find in other holiday treats. You can mix your own with cinnamon chips or  cinnamon sticks, dried orange rinds, whole allspice, whole cloves, and (if you have it) dousing a little cinnamon oil and orange oil into the mix. Star anise and cardamom are also popular. You can buy mulling spices online at Amazon HERE or Target HERE or from any of these online retailers.

All of us at JASNA Central California hope you have a merry, merry season and we’ll see you in 2020!